Portland, ORE.  For centuries, bamboo has proven itself to be one of the most versatile products in the world.  With thousands of species from which to choose, bamboo has been used to build homes because of its strength and durability.  At the same time, the material is used in bedding and clothing due to its ability to be made to feel like silk.

Bamboo’s use as a flooring material is no different as its many qualities – from durability to styling-have caught the attention of consumers and designers.  In recent years, technological advancements such as strand woven construction have opened up even more doors in terms of the product’s performance and fashion attributes.

Even with its vast flexibility, there are still some people who want the performance of bamboo but with a more classical, traditional hardwood floor appearance. Thanks to Wellmade Performance Flooring it is now possible to give end users the best of both worlds with its new Clear-Tec-Bamboo Imaging technology. 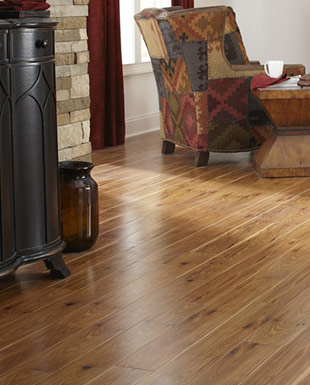 Steve Wagner, director of sales and marketing, said Clear-Tec “takes high definition visuals to a new level.”  Wellmade’s innovative HD printing technology is applied directly onto an eco-friendly, three-ply horizontal bamboo core.  “Add to that our commercially rated HardMax wear layer, which boasts a 15-coat aluminum oxide finish, and you have a product that sounds and performs like hardwood, but outperforms other species.  These are floors of extraordinary style, value and superior performance.”

The first products to feature the Clear-Tec technology are in the new Old Growth Series.  “From heart pine and wormy chestnut to American walnut and old growth cherry, we are now able to print reclaimed, old growth character grades directly on bamboo,” he explained.  “Some of these are woods you cannot get anymore, unless you get it reclaimed and then it can be extremely expensive.”

A total of eight SKUs make up the initial Old Growth launch.  Adding to the product’s visual are five-inch wide planks and micro-beveled edges.  The result, Wagner said , is a collection of products that has “an authentic visual but with the performance of bamboo.  That’s because we are directly printing on the bamboo, not a paper veneer.”  The overall visuals, he added, “are precise in every detail.”

Wellmade has also created a stand-along merchandising unit that displays all eight SKU’s in large samples so consumers can get a better sense of the true visual, Wagner noted –“something that cannot be done by showing just one plank.”

Products in the Old Growth Series can be installed on or above grade using nail/staple or glue-down methods.  The collection is backed by 30-year residential and 5- year light commercial warranties.

For more information on Clear-Tec or the Old Growth Series, contact your Wellmade distributor or call 866.582.0848