The rise in popularity of bamboo over the last several years is due, in part, to its sustainable attributes.  With the A&D community and the consumer placing so much emphasis on green, the flooring that was the epitome of environmentally friendly is finally reaping the benefits.

But after being considered a niche floor for decades, could it be more than its miniscule carbon footprint that is making bamboo so popular?  One company that is leading the way by offering consumers more than just the traditional standard bamboo begs to differ.

Utilizing the latest in state-of-the-art technology and keen design sense, Wellmade Bamboo Flooring believes the more fresh looks you offer, the more attention you will get.  And when you throw in a simple and easy method of installation along with bamboo’s inherent durability, Wellmade’s flooring products have proven to be an unbeatable combination.

With a manufacturing facility in Nan Jing, China and corporate offices in Portland, Oregon, Wellmade controls every detail of the manufacturing process and assures on-time delivery to its customers.  Quality and innovation remains its ultimate goal while it continues to produce the finest solid and engineered bamboo flooring in a wide variety of colors and surface treatments. 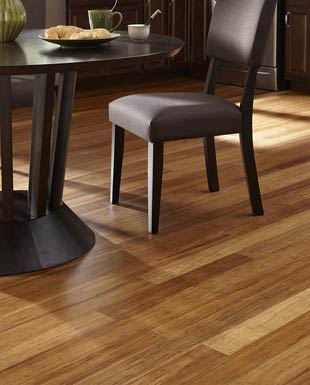 “Throughout production exacting standards are met and closely monitored with the latest quality control technology,” noted Steve Wagner, director of sales and marketing.  “The result is flooring that installs easily and performs better than expected.”

What is Wellmade’s competitive advantage?  According to Wagner, one of the things that differentiates the company from its competition is simple.  “In a nutshell, Wellmade produces premium quality bamboo flooring.  We source only Moso bamboo, the highest quality raw material that can be used to make flooring.  Our 13-coat HardMax aluminum oxide finish boasts almost twice the industry standard, which is a 7-coat finish.  Attention to detail is the key.”

Wagner explained that Wellmade’s solid strand and traditional bamboo products have a urethane finish applied to the underside of each plank which adds dimensional stability.  Paraffin based wax is also applied to all milled edges to provide additional protection against topical moisture.”  With a thick-sawn 4 mm wear layer and 7-ply eucalyptus base, the company’s top-selling engineered strand is among the industry’s most dimensionally stable bamboo products.  The floors are designed to perform in both the most demanding arid or humid conditions.

According to Wagner, the company offers among the most comprehensive bamboo collections on the market. “In one display system, retailers have access to a full range of color and surface treatments available in solid and engineered strand or horizontal and vertical bamboo.  Tongue-and-groove or genuine Uniclic floating technology are also installation options.”

And it is those installation and color options that have retailers excited about the potential profits they can reap with the Wellmade brand. John Daniell, owner of J.D. Floor Store in Morrisville, N.C., serving the Cary-Raleigh, Durham and Chapel Hill areas, believes Wellmade has created products that fill a niche in the bamboo market.  He noted the products are situated between the lower end offerings of Lumber Liquidators, Home Depot and Lowe’s and the expensive products offered by some other manufacturers. “The advantages of doing business with Wellmade are price, availability and variety,” he explained.

Daniell said the solid strand carbonized bamboo from Wellmade is J.D. Floor Store’s number one selling product.  “It’s our best seller due to the industry wide verification that stranded bamboo is the hardest product available, the versatile color of the carbonized material and the ability to glue, staple or float.  And the price, too, of course.”

Wagner couldn’t agree more with this assessment.  “There are several things that are very hot.  Carbonized products, particularly in strand woven, are a top seller mainly because we package it with two different shades in a box, which gives it a lot of character.  The stranding mimics the look of graining.  The consumer still has that honey oak mentality, and I believe the carbonized product really hits a sweet spot.”

Additionally, the company is seeing a lot of uptick with its stained products, including an auburn color featuring a rich mahogany look which sells very well, he noted, as well a some of its hand-scraped offering.  According to Wagner, strand woven has entirely changed the playing field.  “For years, everyone associated the traditional in horizontal and vertical with bamboo.  However, in the last three or four years since strand woven has been introduced it has been driving our programming.”

Wes Carol, store manager of Special Effects in Raleigh, N.C., agreed with both Daniell and Wagner, saying he is partial to Wellmade’s wide variety of finishes.  “It’s not your average bamboo look.  Wellmade offers more than what is currently on the market and was one of the first manufacturers to offer French bleed, hand-scraped bamboo as well as strand woven products.  I like that it is offered in both solid and engineered form.  In the South, we work with a lot of raised slabs in the coastal areas.  There is a big issue with humidity, so having the engineered product gives us an advantage.”

Carol said when a customer is looking for bamboo flooring Wellmade offers more looks and colors than any of its competitors and “no one has this many offerings right now.  I’m sure more [manufacturers] will up their offerings, but Wellmade was one of the first to do so, therefore we have that advantage because we’re using its products.”

He said more customers have been asking for bamboo over the past year.  “I believe this has a lot to do with what they see on TV, the DIY shows and HGTV.  That’s where we step in, along with Wellmade and its literature.  They give consumers information about the products and explain the benefits of bamboo versus something else.  They’re great tools, but your staff still needs to educate customers.”

Whether a final choice is bamboo or not, other options are up to the consumer after that, noted Carol.  “We try to sell the fashion aspects of the product, the colors. We have a lot of new construction in our area with 90% of our business coming from that category.  When we offer bamboo to a homeowner who is building a new house he/she wants to match cabinets and such.  If that customer is looking for bamboo, Wellmade offers many more color to choose from than just the standard carbonized or natural shades you see so much of today.”

Because of Wellmade’s large stable of colors, the staff at Special Effects is able to match wall colors, as well as cabinets.  “There are all kinds of things people are looking for when purchasing a new house.  Having the engineered product has been a savior for us,” Carol said, “and the consumer really likes the finish on Wellmade products.  No one can match the 30-year warranty.  There are many nice finishes on the market but Wellmade puts out the smoothest.  And with the Uniclic system, the floors install so easily.  It’s just a great solid product, all the way around.”

Daniell believes for most end users who purchase bamboo, Wellmade offers the look and price the consumer wants.  “Our preferred distributor, Haines, has the ordered materials to us by our following delivery date.  This is usually all the customer has to hear to place an order.

For more on Wellmade, visit wellmadefloors.com.